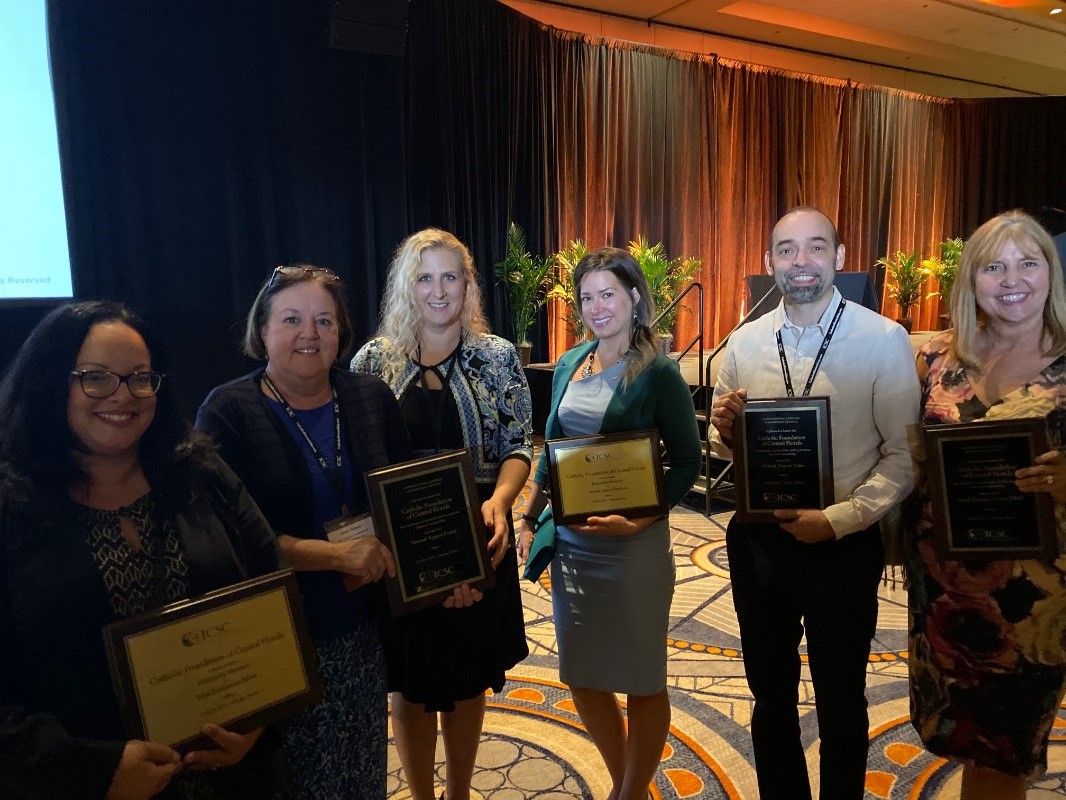 Staff members of The Catholic Foundation of Central Florida receiving their awards.

The Catholic Foundation of Central Florida’s work with local donors has led to a historic number of national philanthropic awards, highlighting its ability to foster stewardship that improves the quality of life for children, youth, adults and families throughout Central Florida.

“We appreciate the recognition of our peers as we believe strongly in our culture and how we implement our services,” said Kimberlee Riley, The Catholic Foundation’s president and CEO. “Collaboration is an organization value and the award-winning video was developed through our partnership with the Diocese of Orlando’s Communications office. Our Planned Giving Program is distinctively different, as we focus on the transition of philanthropic values between donors and their loved ones, not just the transfer of assets.”

The Catholic Foundation is a philanthropic and investment organization that partners with generous donors to improve the quality of life for children, youth, adults and families throughout Central Florida. It oversees more than $54 million in investments that are managed for growth and to respect Catholic social teaching. As a result of these investments, The Catholic Foundation this year has distributed more than $2 million to strengthen parish and faith life, and to address community needs in Central Florida.

The Catholic Foundation inspires giving to fund God’s work throughout the Diocese of Orlando’s nine-county area. Established in 2008, The Catholic Foundation is an independent, nonprofit foundation that has worked with donors and pastors to support our community. Its assets of more than $54 million in investments are managed for growth and to respect Catholic social teaching. We help individuals and organizations engage in philanthropy in a faith-filled way through socially screened investment options. These resources have built new and expanded churches and community centers to grow faith life in the Diocese as well as prepare seminarians for the priesthood and support retired priests. Additionally, these funds support education, health, housing and food assistance addressing community needs throughout Central Florida.

For more information, contact: Rafael Gerena, Director of Communications, at rgerena@cfocf.org  or 407.246.4888