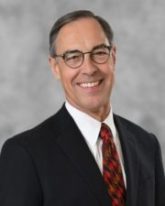 Thomas Chandler, AIA of Orlando, was elected Chairman of The Catholic Foundation of Central Florida at the Foundation’s annual meeting. Tom’s appointment as Chairman is the culmination of years of steadfast commitment and leadership having served as a Foundation Board Member since 2011.

Tom is President and CEO of SchenkelShultz Architecture, a respected Orlando architectural firm with a focus on the market sectors of aviation, education and community based initiatives. Tom is a former Orlando Business Journal’s “Businessman of the Year” award winner and a respected philanthropist in Central Florida. His affiliations include Ronald McDonald House Charities of Central Florida and the Boys and Girls Clubs of Central Florida.

Tom brings his professional acumen at a key moment for The Catholic Foundation of Central Florida, a philanthropic-and-investment organization that oversees more than $54 million in investments that are managed for growth and to respect Catholic social teaching.

“As Chairman, I want to enhance the knowledge and awareness of The Catholic Foundation’s good work to the Greater Orlando community, as well as further develop a Board of Directors that reflects the diversity of the Diocese of Orlando” Tom says.

The Catholic Foundation is currently implementing a three-year strategic plan with a 10-year vision. It is a holistically envisioned plan created in partnership with Bishop John Noonan, donors, board members, pastors, staff and community stakeholders. The plan’s top goals include improving secular and faith life for Central Florida residents through community partnerships, donor engagement, and faith-based investment management.

The Catholic Foundation’s philanthropic impact is far reaching: Through its investments, it supports education, housing, food, medical and mental-health assistance for Central Florida’s poor and vulnerable populations. It also supports every parish and school in the diocese, as well as the spiritual and corporal needs of the community.

The Catholic Foundation inspires giving to fund God’s work throughout the Diocese of Orlando’s nine-county area. Established in 2008, The Catholic Foundation is an independent, nonprofit foundation that has worked with donors and pastors to support our community. Its assets of more than $54 million in investments are managed for growth and to respect Catholic social teaching. We help individuals and organizations engage in philanthropy in a faith-filled way through socially screened investment options. These resources have built new and expanded churches and community centers to grow faith life in the Diocese as well as prepare seminarians for the priesthood and support retired priests. Additionally, these funds support education, health, housing and food assistance addressing community needs throughout Central Florida.

For more information, contact: Rafael Gerena, Director of Communications, at rgerena@cfocf.org  or 407.246.4888